The company was originally designed by Shinya Uchida as an affiliate of the Marine Department of Mitsui & Co., Ltd. for the purchase and construction of new ships. At the general meeting held on May 1,1911, the firm was established with a capital of JPY212,500. The company was officially registered on May 10 of the same year. Its primary business objective was international marine transportation, however initial operations were limited to the transport of Mitsui Mining's coal. Later, this restriction was loosened to include a larger range of products. A great boost of the company during this period was the increase in shipping rates, which pushed growth beyond predictions and allowed all debt(JPY180,000 at the time of founding) to be cleared by 1913.
In January 1914,the company established Taisho Kaiun, a wholly owned subsidiary in Dalian, China. Meiji's ships were now connecting Japanese ports with Hong Kong, Singapore, Manila and Hawaii.

The outbreak of World War l ignited demand for marine transportation. During this period, Japan's shipping industry expanded its network to include North and South America and other parts of the world. The company responded by purchasing more ships and building its first one in 1916, followed by the second and third in 1917.
A remarkable record was attained in 0ctober 1916 when the profit ratio of paid-up capital before depreciation was 688.1 percent, and the dividend reached 25 percent. There was no debt and employees received semi-annual bonuses of between 50 and 60 months' wages. 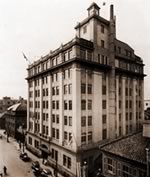 The shipping industry was not free from postwar recession. Although the company once enjoyed high dividends, they dropped to zero in 1921. The situation became worse in 1930 when the prices of ships had to be reduced. For the first time in the company's history, capital had to be reduced in order to save for the future. In June 1921, Meikai Building, then the largest building in western Japan, was completed. Part of the space was for company offices, and the remainder was leased to such marine transport-related organizations as The Kobe Chamber of Shipping, Japan Shipowners Association and Lloyd Register, Meikai Building quickly became the new base of marine transport in the Kansai area. The company altered its registration in May 1924 to include office space leasing as part of its business services.

After a lengthy postwar stagnation, the marine transport industry in Japan began recovering in 1937, sooner than other areas of the world. This was primarily due to growth of exports and domestic industries under inflation brought about by demand during the war. Meiji Shipping demonstrated stable and steady growth, with dividends increasing from 4 percent in April 1933 to 12 percent 1938. After that it remained at 10 percent. In December 1938, the company built its first ship equipped with a diesel engine, and in 1940, a wing was added to Meikai Building.

During World War ll, the oceans of the world became battlefields. Ships and ports were destroyed as the war intensified, paralyzing sea transportation. Meiji Shipping built a new vessel in 1940 and absorbed Goshu Kisen in 1943 and Taisho Kaiun in 1944 to expand its fleet. Yet the war's toll on the firm was extensive: 16 vessels totaling 112,161 tons were lost, leaving only two wartime standard ships, M/S Meiyu Maru and M/S Meio Maru with a combined tonnage of 12,576. In addition, an air raid in June 1945 damaged The Meikai Building.

The shipping industry suffered a fatal blow in October 1946 when wartime compensation, including insurance for sunken ships, was suspended. The company lost almost all of its accumulated capital. However, construction of another wartime standard ship was finished in 1946. This was followed by the approval in August of an application for financial support from the government's reconstruction plan for private industry. In March 1949, the company established Tochigi Real Estate Co., Ltd.(renamed Meiji Real Estate Co., Ltd. in 1956). In May of the same year, the company was listed on the stock exchanges of Tokyo, Osaka and Kobe, and in June was assigned for the first time in its history to build and operate a ship (M/S Meiten Maru) as part of the government's scheduled shipbuilding program. Capital increased from JPY6,600,000 at the end of the war to JPY1,000,000,000 in December 1949.